11/27/2015 – At 09:55pm the New Paltz Fire Department received an emergency alert for a reported Attic/Roof fire at 21 N. Chestnut Street in the Village of New Paltz.  Tenants were evacuated upon arrival of command. First arriving crews observed a heavy smoke condition in 3rd floor stairwell, upon further investigation a small fire in the attic crawl space was found.  Command transmitted a second alarm working fire in the attic.  Firefighters were able to extinguish the fire immediately and complete overhaul of the immediate area to check for any fire extension.  Cause of the fire was linked to an electrical issue with the wiring in the attic space.  Three tenants were displaced for the evening and the building has been closed off to the public due to hazards determined unsafe by the Village of New Paltz Building Department.  All crews were clear of the scene at around 12:00am.  Mutual Aid called for this incident: Modena FD, Highland FD (FAST Team), New Paltz Rescue Squad, New Paltz PD, NYS Police, UC Sheriffs Office, NP Village Building Department, and the Ulster County Fire Cause and Origin Team.  Thank you to all the agencies that came to our assistance for the incident. 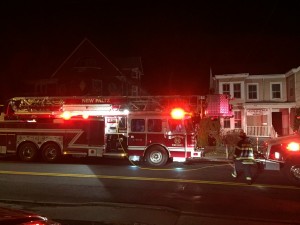